You've read about Will's commercial work, done only days after birth. Now you, too, can see the video here.

It's amazing to me how much he's changed since he was born.

So we're casually looking for a larger car to replace Christina's Toyota Corolla. Nothing wrong with the little sedan, it's just, uh, little. Once we get a stroller in the trunk, it's done. There ain't nothing else going in there.

We're not totally sure we'll buy any time soon, just doing some early shopping to weed out the cars that won't fit in our family. We're open to suggestions, anecdotes, experiences, etc.

Here are some of the cars that have fallen by the wayside early in the shopping game...

Dodge Magnum
Christina and I loved this car for its loads of horsepower and plenty of room. I didn't like its very thirsty engine and higher-than-we-like cost. Christina had trouble seeing out of its tiny little back windows.

Toyota Matrix/Pontiac Vibe
Stylish wagonesque hatchbacks with lots of personality. We probably won't even drive them since they look way too small on the inside.

Ford Focus Wagon
Christina drove the Focus sedan when shopping for the Corolla. She just plain didn't like the car. I wasn't a big fan despite most car magazines going nuts over it. Plus, it's a Ford.

Cars still in the running:

Dodge Caliber - I drove it Monday, Christina hasn't yet.

Honda Fit - I've driven it, Christina hasn't but likes the looks of it.

Volvo V70 and V50 - Looked in one, but that's it. Should be able to get a used one affordably.

Mazda 6 Sportwagon - A contender, but no test drives yet.

Subaru Outback/Forrester/etc. etc wagons - Still confused about which one's which.

Chrysler PT Cruiser - Sure we already have one. But it fits us great. Why not two?

Honda Odyssey - a longshot, but still a possibility 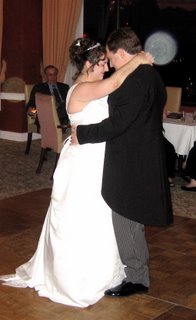 In my profile (over there on the right and badly in need of updating) I say I covet a 1956 Chevy Nomad. Still true, I assure you. But Christina and I are both big fans of 1960s era wagons too.
I still want a 1956 Chevy Nomad. Oh, how I do. But outfitting one with seatbelts and airbags and power windows, etc. costs LOTS of money (we're talking in the $100,000s.).
So imagine my joy when I find these concepts of a 2007 Dodge Charger and Plymouth Fury station wagons. OMG. OMG.
Where do I sign?

Unfortunately, these are not concepts from Dodge. They're from Andre Schaefer in Germany. Apparently he's just some guy who is a real whiz with Photoshop and an eye for hot auto design.

Sean and I used to do this very thing back in the day. Wish I still had that slammed Camaro I did or that 6-wheeled SUV Sean made.
BTW, these concept cars were totally stolen from CCW Automotive Design. That guy rocks! Someone should hire him quickly.

We had two reasons for going to Mississippi last weekend. One was to show off Will, of course. The second was to see my cousin, Blake Cruse, graduate from Ole Miss. Just like his father did. Just like his cousin Mike Campbell did and just like I did.

Blake graduated after only four (yes, we did beg him to at least make it five if not six) years with a degree in insurance risk management.

Will Will do the same thing? I'm torn. While I'd love to see him at least follow my college choice, like every other father before me, I want to see him do better than I. So I'm pulling for MIT. Now accepting donations. 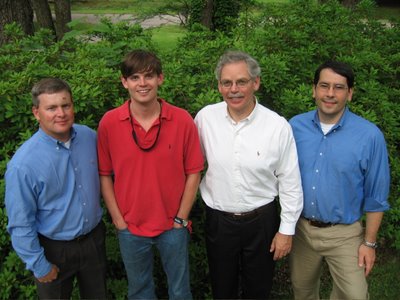 May 12, 2006, we took Will across state lines to visit his extended family in Mississippi. It was his first trip outside the city limits of Birmingham. We put him in his car seat here in Crestwood and he fell asleep. He didn't wake up until we were driving down my parents' driveway in Pontotoc, Miss.

Will met lots of folks he'd never seen before but who already were in love with him.

Click on any photo to see a much larger size.

My grandmother, Mary Frances Jackson, gets to meet Will for the first time. I have to say I've waited all my life for this moment. To present our son to my grandmother was a joyous occasion. 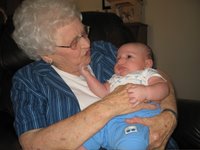 My niece Carson, far left, says hi to Will for the first time. She missed a couple of other opportunities to meet him and almost missed this one. She got back from Disney World the day after we got to Pontotoc. Next to Carson is my youngest sister Rebecca and my sister Beth. 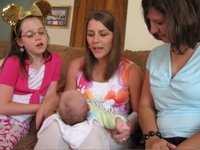 Uncle Joey Rogers meets Will for the first time. 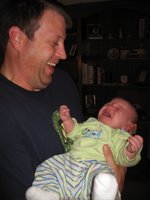 Jody Thompson and her daughter Laura came over for a visit while we were in Pontotoc. 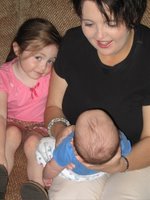 Caroline Miller, my niece and Will's first cousin, holds Will. 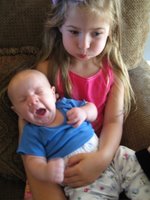 Will and his grandfather. 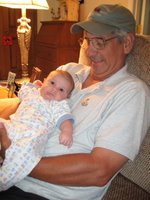 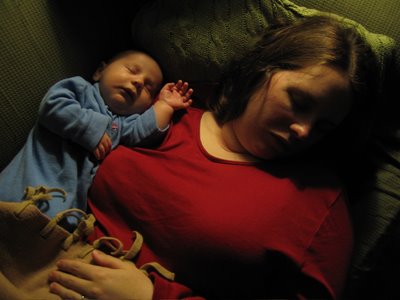 I came in from work very early Thursday morning to find these two snoozing on the couch. Peaceful.

Grandmother Annette came down from Memphis May 6, 2006, to visit and we went to Aldridge Gardens. A very nice day for a garden stroll. 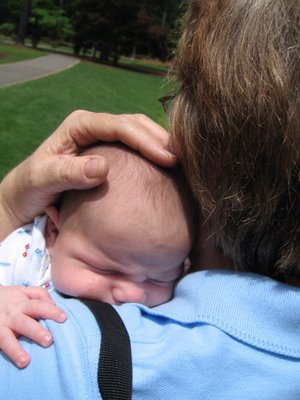